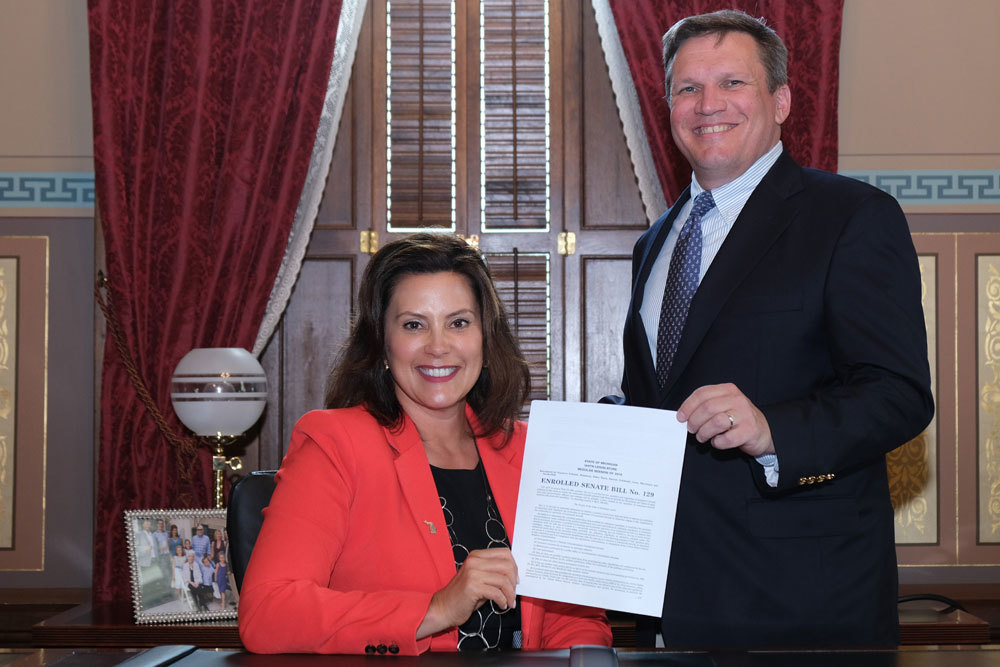 State Sen. Wayne Schmidt (R-Traverse City) stands with Gov. Gretchen Whitmer after she signed Senate Bill 129 into law during a bill-signing ceremony in 2019.

In her Jan. 29 State of the State address, Gov. Gretchen Whitmer proposed eight program expansions and no government limitations.

After a 2019 battle over funding for the roads between Whitmer and the state Legislature, it seems the roads are a priority for Whitmer in 2020. She called for a bond program to work on “the worst of” the state’s highly-traveled state roads, but admits that other solutions are necessary, says the Mackinac Center for Public Policy.

“Gov. Whitmer claims that taking out bonds will save money over time, but that isn’t the case. Debt costs interest,” said Michael LaFaive, senior director of fiscal policy at the Mackinac Center, said in a release. “The money we pay on interest each year could be going towards today’s road repairs, but instead we’re still trying to pay off $1.1 billion in transportation debts from over a decade ago.”

She also emphasized support for the Affordable Care Act, although she admitted that residents do have a lack of coverage and there is still a lack of affordable plans.

“Doubling down on support for a failed scheme like the ACA by insisting that Michigan enshrine it into our own state laws demonstrates a lack of vision and commitment to solving very real and critical challenges,” said Lindsay Killen, vice president for strategic outreach and communications for the policy center, in a release. “Instead, it's time that we solved these issues with solutions that get government out of the way, preserve a secure safety net for the most vulnerable, encourage innovation, drive down costs, increase access and quality and permit flexibility for Michigan patients.”

Want to get notified whenever we write about Mackinac Center for Public Policy ?

Sign-up Next time we write about Mackinac Center for Public Policy, we'll email you a link to the story. You may edit your settings or unsubscribe at any time.